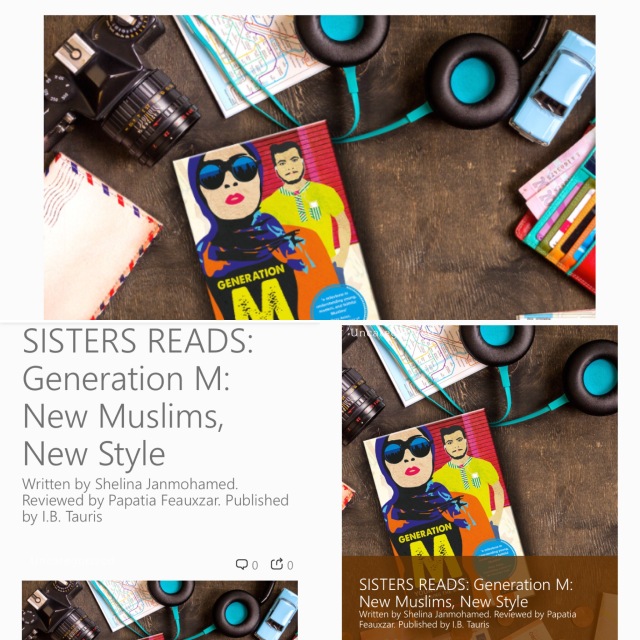 Shelina Zahra Janmohamed, British author of award winning Love in a Headscarf and vice president of the Islamic Branding consultancy Ogilvy Noor, has just released her new title Generation M. Generation M is a textualized documentary, exposing the diverse nature of young Muslim entrepreneurs of the 21st century. We could also say that it’s an exposé by a Muslim insider who knows what it is like to be born Muslim, raised Muslim, and go through life as a Muslim with seemingly limited choices. The book nails the depiction of contemporary young Muslims: innovative, entrepreneurial, trend catchers and setters, steadfast in faith, and very passionate about improving their lifestyle because they believe that faith and modernity go hand in hand.

In my opinion, Generation M, the people, walks the fine line between innovation that adds to Islam and innovation that doesn’t add to our faith. Along the way, the lines get blurred a bit and this is where only the future will tell how Generation M handles these challenges. For now, their achievements are celebratory and really good PR.

Generation M the book is composed of 15 chapters split into five main parts. Part one introduces “Salaam, Generation M.” Part two is about “The Global Muslim Lifestyle” while part three is “Culture: The New Muslim Cool”. Part four is titled “The New Twenty-First Century Ummah” and finally part five is about “The Faithful Future.”

In part one, Janmohamed says, “If publishers are guilty of monolithic misery memoirs, then Muslims must also take some of the blame for not sharing our universal experiences in a language and context that everyone can relate to.” This spoke to me because it’s true. Our narrative is still lacking, and we must all make the effort to be the curators of our time, of our true history.

In Part two, Janmohamed highlights how important halal and tayyab (organic and wholesome) are to Generation M. These concepts are matters that they don’t play with. Be a shady vendor and you will not get away with it when they find out because they always do. We also see that halal and tayyab don’t stop at meat consumption, they cover a wider radius of seeking out ‘good’ things.

In part three, we find out about Donna Auston and the reasoning behind #BlackMuslimRamadan, amongst other interesting Generation M happenings, while in part four, we see that Generation M is dedicated to changing the hijacked Muslim narrative and telling their own stories. They are global citizens and while there are disagreements and minority doctrines within the ummah, Generation M does not despair, they do their part within the community. Finally in part five, we get the full picture of Generation M. For them, Islam is a complete way of life. It’s about living a balanced life that affects the societal, financial, and political sectors. It’s not only about praying five times a day.

A few years ago, when I took a class on International Business as a requisite for my accounting degree, I learned that non-Muslim companies loved to package their products in green if they intend to sell them in Muslim countries especially the Middle East. When I learned that, being an African Muslim, it didn’t bother me at all. It made sense. Muslims love green. I didn’t even think, ‘Wait a minute, this can raise issues of profiling, unintended stereotyping, etc.’ After reading Generation M, I realize that young Muslims will not settle for this ready-made perception of them and it’s their right to want the finer things the world has to offer. There are other colours in the colouring clip board they find attractive. They don’t want just green, yellow or black. And this is to say that we are humans, just like non-Muslims, we aren’t that different from anybody, like many think, and we aren’t monolithic.

Generation M doesn’t chronicle all the building blocks of Generation M, but it certainly snaps an accurate picture of the composition of this generation. In this book, I came across many Muslims changing the world, some new and some I already knew of. Truly, Generation M is so diverse they can’t all fit in one book!

Above all, Generation M are very creative and crafty individuals masha Allah. They give new meanings to just about everything. The Muslim version of sushi was new to me… Start reading the book today to discover new Muslim inventions.

Generation M is available on Amazon and all major book sellers.

Bio: Papatia Feauxzar is an accountant, an avid reader and writer living in Dallas, Texas with her nuclear family. She blogs at papatia.wordpress.com.

Also read about SISTERS Reads: The War Within Our Hearts

The War Within Our Hearts by Habeeb Quadri and Sa’ad Quadri is a great read I recommend right off the bat to any Muslim parent dealing with challenging teenagers or trying to start early discussions with youth. The authors are both teachers with an impressive background dealing with Muslim youth issues. As a matter of fact, Habeeb Quadri is Principal of the Muslim Community Center Full Time School in Morton Grove, Illinois while Sa’ad Quadri is a teacher and Dean at the College Preparatory School of America in Lombard, Illinois.

Nowadays, living a life while following the principles of Islam has become a real challenge, from East to West. This is where The War Within Our Hearts comes in as a guide to help make the journey easy for the wayfarer in need of guidance.  It starts with an introduction prose by Imam Zaid Shakir who heeds the reader to look at the bigger picture of dunya and how all of our tests and torments began; namely with Ibliss refusing to bow to our forefather Adam (AS) and how we can start fighting back to win the war Ibliss has declared upon us since the beginning of times. In my opinion, if we constantly look at life under these lenses, we will never lose sight of the prize; a blissful Akhirah.

The War Within Our Hearts is divided into two parts. Part one spells out the problems the ummah and especially the Muslim youth in general face. There are nineteen insightful chapters to part one. Part two -Solutions- on the other hand is comprised of nine chapters, also very insightful.

Each chapter in part one addresses one daily problem the ummah faces. As an example, one issue discussed in a chapter of The War Within Our Hearts is “Night Clubs”; a worrisome venue for many parents trying to raise young believers. Chapter one and two have about the same layout with no ending thoughts, yet they are complete. However starting at chapter three, each chapter closes with a summary box of practical solutions the reader can start doing to help him with the issue at hand and discussed.

For instance, chapter seven deals with “Drinking & Drugs” and we are given rampant and alarming statistics of this societal issue, cautionary advices, Quranic verses, some tafsir and finally the practical solutions to avoid falling in the traps of intoxicants because they are rigorously and unmistakably forbidden in Islam. The practical solutions includes some names of Allah (SWT) the reader can recite in dhikr format to grow closer to Allah and grow away from the vice insha Allah.

The War Within Our Hearts gives us the much needed recall to Islam we need on a recurring basis. Life gets busy and as humans we tend to lose focus of the meaning and goal of our sojourn in the dunya; passing this challenging worldly test with the prescriptions given to us by the Sunnah and the Qur’an. Without any bias, I recommend this book again to Muslim parents and youth alike. Muslim parents need to read The War Within Our Hearts because it will help substantially cut out the difference of generational misunderstandings which occur quite often between parents and children. No one likes to be lectured. Just giving young people the book can make a difference because the advice comes from a third party and they can make their own opinions and take heed insha’Allah. It was definitely beneficial to me as it helped me reflect on many things alhamdullilah. If I live to see my son grow, this is a book I’ll give him to read insha’Allah.

Having said that, you don’t have to be a Muslim youngster to benefit from the heeds being given. Anyone can insha’Allah. It will benefit any reader who doesn’t mind reading cautionary non-fiction Islamic books. You can purchase The War Within Our Hearts on Amazon.

Papatia Feauxzar is an Author and Muslim Publisher who holds a Master's degree in Accounting with a concentration in Personal Finance. She now works from home at https://hhaccountingsvcs.webs.com/ alhamdullilah. You can visit her website at www.djarabikitabs.com or her sister's website www.fofkys.com
View all posts by Papatia →
This entry was posted in Diverse Books, Faith, mvslim, Reviews, Writing and tagged Generation M, Habeeb Quadri and Sa’ad Quadri, Haloodie, Muslim Millenials, Shelina Janmohamed, SISTERS, SISTERS MAGAZINE, Sisters Reads, The War within our Hearts, Young Muslims Changing The World. Bookmark the permalink.