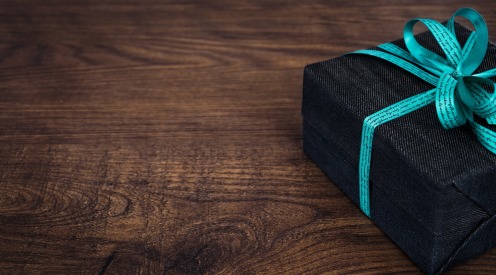 Earlier this year, I declared that I wanted to sell 20,000 copies of my young adult book The Ducktrinors : Hanifa Book 1. We’re half way through the year and to be honest, I have not sold landslide amounts. However, I have six more months to make it happen if it’s meant to be insha’Allah! And if I do sell that many copies, I’ll reveal my name insha’Allah to y’all 🙂 .

Futhermore, the praises for Hanifa Book 1 received by April 2016 have been included in the reprint of the book’s early pages:

“…The Ducktrinors is a bit of a mix; sci-fi, romance, crime. I have read many sci-fi books over the years and always found them very imaginative. Papatia has brought in many believable but imaginative futuristic elements to the novel…” — Muslim Mummy

“…Though at times I felt that the things moved ahead too fast and that the author should have warranted us some more details, it was nevertheless a page turner till the end. It was an enthralling read and I would definitely recommend it to all the Harry Potter and Hunger games fans out there! …” — Munna, Baba & Me

“… The novel is fast-paced and simply yet well written which are plus points for gripping attention of young adult readers.
Enjoyed the character of Dawood and Ali… Hope she won’t leave us hanging for so long to read the next volume of Ducktrinors. Recommending the book for teenagers and readers who never grow old …” —ThinkalolicMom

“This book is one of the most original works of Muslim fiction I have come across. Veering away from the usual, it’s set in a time that is almost the end of the world. It reads very much like a sci-fi novel, with futuristic gadgets and gizmos and incredible technological advances, however there is still a heavy dose of Islamic references. It’s a first book in what promises to be an interesting series. It dares to imagine what Islam might be in the faroff future… — Raising Young Believers

“…THE DUCKTRINORS” combines two powerful genres; the school story and the scientific fantasy. And to a great extent, the author depicts reality by demonstrating an advanced version of the occurrences of this present time. I must confess that I really enjoyed reading this book as I impatiently await the next part. This is definitely a keep for the pleasure of my future adventure – thirsty children. I highly recommend this “must read” for every teenager, young adult and adult alike. I must say that this is the very first attempt at producing an intriguing Islamic science fiction as the book spells utter creativity and ingenuity. I won’t be surprised to see a motion picture of it in future.” — The Rose’s Pen

“…The imagination of writer is good and has done quite well in describing the scene for your mind to imagine well. Reading some chapters will remind you of Harry Potter book. I feel the novel is for teenagers and younger audience but I still loved reading it to the child inside my heart…” — A Day Dreamer’s Diary

The new back cover 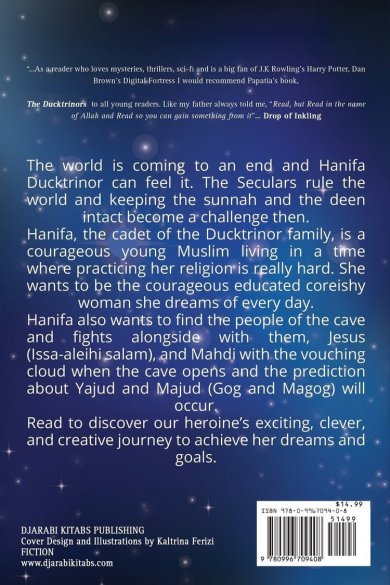 Click Drop of Inkling and Brooke Benoit for their social platforms insha’Allah.

Get your eCopy today for $0.99 on Amazon and make a Muslim young adult dream and say thank you to you with duas. Everybody has smartphones today and a Kindle App is free and a few fingers tap away! 🙂 Get tapping folks!

Papatia Feauxzar is an Author and Muslim Publisher who holds a Master's degree in Accounting with a concentration in Personal Finance. She now works from home at https://hhaccountingsvcs.webs.com/ alhamdullilah. You can visit her website at www.djarabikitabs.com or her sister's website www.fofkys.com
View all posts by Papatia →
This entry was posted in By the Roman, Eid, Muslim Fiction, Ramadan, Ramadhan, Reading, Reviews, Sadaqah, Writing, Young Adult (YA) Literature and tagged Book 1, By the book, By the Roman, Hanifa Ducktrinor, The Ducktrinors. Bookmark the permalink.